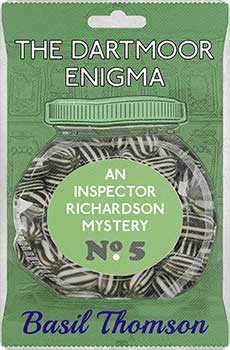 “I’m writing to you about the death of Mr. Dearborn. You bet the murderer’s laughing up his sleeve now that he’s got away with it.”

“I’m writing to you about the death of Mr. Dearborn. You bet the murderer’s laughing up his sleeve now that he’s got away with it.”

An inquest is held in South Devon on the death of a man apparently killed in a motor accident on Dartmoor: the verdict is “Death from misadventure.” But soon afterwards Scotland Yard and the Devon Chief Constable receive anonymous letters alleging that the verdict was wrong; that the death was caused by blows inflicted by a person, or persons, unknown.

The Chief Constable asks for help from Scotland Yard. Richardson is detailed, as Chief Inspector C.I.D., to unravel the case. A discharged quarryman is suspected by the local police; Richardson clears him. He finds the writer of the anonymous letters, but he also finds that the dead man had shrouded his own past in mystery and was going under an assumed name. It looks like the most difficult case he has had to unravel, but Chance steps in to provide him with a clue…

The Dartmoor Enigma was originally published in 1935. This new edition, the first in over seventy years, features an introduction by crime novelist Martin Edwards, author of acclaimed genre history The Golden Age of Murder.

“Sir Basil Thomson’s tales are always good reading, and he has the knack of being accurate about Scotland Yard.” Dorothy L. Sayers