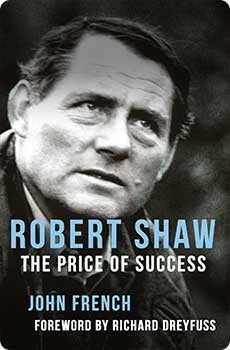 Robert Shaw is most celebrated today as the Oscar-nominated star in movies like From Russia with Love, A Man For All Seasons, The Sting and – most memorably of all – as Quint in the record-breaking Jaws.

His breakthrough came when Hollywood was experiencing something of a British Invasion. Sean Connery, Peter O’Toole, Vanessa Redgrave and Richard Burton were among the new stars. But Shaw was arguably more talented than any, a figure of extraordinary and wide-ranging promise. More than just a mesmerising actor on stage and screen, he was also a gifted writer. He wrote no less than six published novels (winning the Hawthornden Prize), while his plays include the acclaimed Man in The Glass Booth.

The flipside to Shaw’s diverse abilities was his well-earned reputation as a hellraiser. A fiercely competitive man in all areas of his life, whether playing table tennis or drinking whisky, he emptied mini-bars, crashed Aston Martins, fathered nine children by three different women, made (and spent) a fortune, and set fire to Orson Welles’ house. He died at 51, having driven himself too hard, too fast, but unable to get over his father’s suicide when Shaw was just 11.

John French, Shaw’s biographer, knew him well, professionally and personally. Robert Shaw: The Price of Success is a perceptive, sympathetic, but unsparing portrait of the blessings and curses endowing this mercurial, enigmatic and deeply engaging man.

‘I liked Robert Shaw: The Price of Success tremendously, and applaud its digital rebirth.’ Robert Sellers, author of Hellraisers and Don’t Let The Bastards Grind You Down