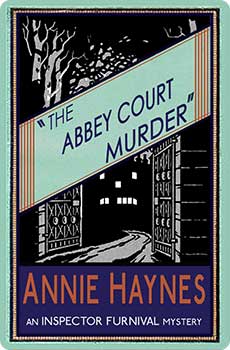 “A crime of a peculiarly mysterious nature was perpetrated some time last night in a block of flats called Abbey Court.”

“A crime of a peculiarly mysterious nature was perpetrated some time last night in a block of flats called Abbey Court.”

Lady Judith Carew acted furtively on the night of the Denboroughs’ party. Her secret assignation at 9:30pm was a meeting to which she took a loaded revolver. The Abbey Court apartment building would play host to violent death that very night, under cover of darkness. The killer’s identity remained a mystery, though Lady Carew had a most compelling motive – and her revolver was left in the dead man’s flat…

Enter the tenacious Inspector Furnival in the first of his golden age mysteries, first published in 1923. Though there are many clues, there are just as many red herrings and the case takes numerous Christie-esque twists before the murderer can be revealed. This new edition, the first printed in over 80 years, features an introduction from crime fiction historian Curtis Evans.

“Annie Haynes does, in The Abbey Court Murder, what all writers of mystery stories aspire to do, and so few carry off successfully… It is a first-rate story… the plot thickens with every page, leading us on to the final climax in a state of unfluctuating interest.” Bookman