Being And Becoming: A Memoir 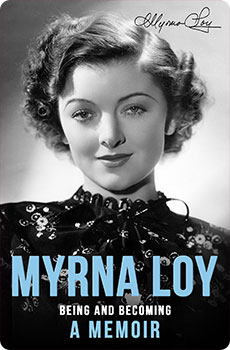 “There ought to be a law against any man who doesn’t marry Myrna Loy.” James Stewart

“There ought to be a law against any man who doesn’t marry Myrna Loy.” James Stewart

Myrna Loy is an indelible star of Hollywood’s golden era, enjoying an extraordinarily successful film career lasting over fifty years. Her most famous and evergreen role is perhaps as Nora Charles in the long-running Thin Man series of films, gilding her screen persona as ‘the perfect wife’.

Myrna Loy’s early life was spent in Montana. After relocating to California, her talent for dancing and her personal charm soon brought her to the attention of Hollywood, where she began appearing in movies in 1925. In addition to detailing her hard-working acting career, she talks openly of her close friendships with her leading men, as well as stars such as Joan Crawford (whom she met as a youngster in a chorus line). Along the way we hear personal reminiscences of Myrna from many luminaries, Gary Cooper (a fellow Montanan), William Powell, Loretta Young, Clark Gable, Rosalind Russell and Burt Reynolds among them.

An equally important part of Myrna Loy’s life was built around her political passions, supporting the UN and Democratic presidential candidates from Truman onwards.

Myrna Loy is a luminous and inspirational twentieth-century figure, a champion of humanity as well as a great film star. If there is one word that sums her up, it is ‘exemplary’. This new edition of her memoir features an introduction by film historian Imogen Sara Smith.