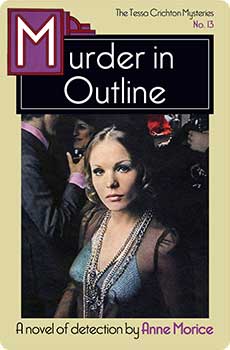 Actress Tessa Crichton has mixed reactions to being on the panel of judges at the annual inter-house competition of the Waterside Drama and Ballet School, her alma mater. When she arrives on campus, the headmistress is having an affair with the founder’s husband, a kleptomaniac is on the loose among the budding thespians, and the beloved and bewildering foundress is suffering from a most mysterious illness. When a student with a penchant for drawing compromising caricatures is found dead, the picture is one of murder most academic.

Is it illicit love among the staff? Stealing among the students? Espionage among the alums? Or a scheme so beastly that Tessa’s search for a killer becomes an education in the elusive evil one might find behind the most friendly facade.

Murder in Outline was originally published in 1979. This new edition features an introduction and afterword by crime fiction historian Curtis Evans.