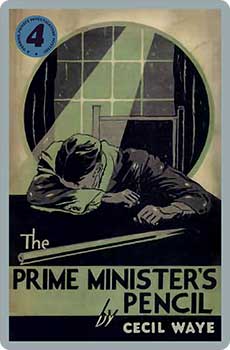 “Terrible disaster at the House of Commons.”

“Terrible disaster at the House of Commons.”

Christopher Perrin, investigator, is drawing up a confidential report for a distinguished client, when he is interrupted by Miss Millicent Rushburton, daughter of leading politician Sir Ethelred Rushburton.

Miss Rushburton is trying to trace her father’s secretary, Cuthbert Solway, who has vanished following a visit to a Harley Street specialist. Perrin contacts his old friend Inspector Philpott, who discovers the missing secretary dead in the grounds of Oldwick Manor. The local doctor examines the body but initially is unable to find any cause of death. Equally baffling is Sir Ethelred’s dismissive attitude towards the police investigation.

A post mortem concludes that Solway died of an exotic parasitic disease. An astounding development follows and, arguably, one of the most sensational murders in any detective novel of the Golden Age.

The Prime Minister’s Pencil was originally published in 1933. This new edition features an introduction by crime fiction historian Tony Medawar.