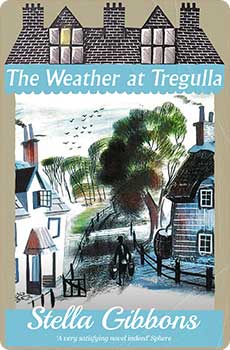 Terence danced, alas, only fairly well. She tried to hide the fact from herself.

Terence danced, alas, only fairly well. She tried to hide the fact from herself.

Una Broadbent, nineteen years old and desperate to leave the small Cornish town of Tregulla to try her luck on the London stage, finds her hopes dashed by her mother’s sudden death and its financial implications. She broods about, working with her father on their small flower farm, but her boredom melts with the arrival of a womanizing artist, Terrence Willows, and his charming sister Emmeline (who spends her time ‘footling about’). On hand to witness the resulting sparks are Una’s childhood friend Barnabas, his brother Hugo, recovering from a car crash, their military father, who loathes tourists, and an array of other colourful locals. Soon, Terrence’s dancing ability is the least of the facts Una is hiding from herself...

First published in 1962 and out of print for decades, The Weather at Tregulla is a funny, touching tale of ill-advised young love against the glorious backdrop of the Cornish coast. This new edition features an introduction by twentieth-century women's historian Elizabeth Crawford.

‘The characters are wonderfully well drawn, with a clear-eyed unsentimental sympathy of which Miss Gibbons has the secret’ Sphere