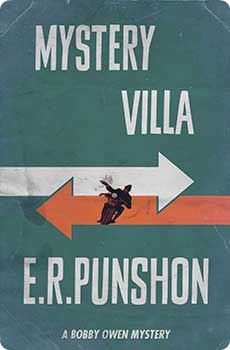 Con Conway, the notorious cat burglar, was not the kind of person to be scared out of his wits for nothing. So it seemed odd to Sergeant Bobby Owen, when he met Con quite by chance rushing, terrified, along a road in the Brush Hill district just before midnight. Afterwards he investigated the house where it seemed Conway had been, yet there was nothing, not a shred of evidence to suggest that swag had been hidden there or taken from there.

It was a strange place, Tudor Lodge; it had an eerie atmosphere and disturbing associations. Twice Sergeant Owen returned to look it over but all he encountered was a very pretty and very frightened girl. Finally he found in the house a murdered man – murdered years ago. Yet still he could not make out why Conway had been quite so frightened – until he went to work in earnest on the job.

Mystery Villa is the fourth of E.R. Punshon’s acclaimed Bobby Owen mysteries, first published in 1934 and part of a series which eventually spanned thirty-five novels.

“What is distinction? The few who achieve it step – plot or no plot – unquestioned into the first rank. We recognized it in Sherlock Holmes, and in Trent’s Last Case, in The Mystery of the Villa Rose, in the Father Brown stories and in the works of Mr. E.R. Punshon we salute it every time.” Dorothy L. Sayers

“Mr E.R. Punshon is one of the most entertaining and readable of our sensational novelists because his characters really live and are not merely pegs from which a mystery depends.” Punch