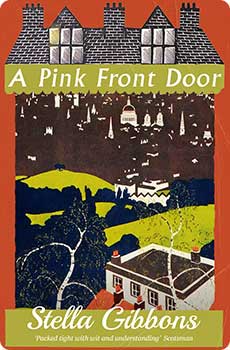 It might be someone in tears, or someone asleep while they filled up time waiting to catch a train, or someone drunk.

James’s gesture with the key was cautious because he was not always sure of who or what he would find in the hall when he got in. It might be someone in tears, or someone asleep while they filled up time waiting to catch a train, or someone drunk.

James Muir has reason to be cautious about entering his own home. His wife Daisy just can’t resist solving everyone else's problems. There’s Delia Huxtable, a young unwed mother, and her daughter Evelyn (‘my illegit’), Molly Raymond, who falls far too easily in love, Tibbs, an Eastern European refugee, and Daisy’s old school friend Don (‘The Hulk’) and his family, for whom Daisy commandeers her neighbour Mrs Cavendish’s top floor. All watched over, reluctantly, by Daisy’s father, a retired Army man, her elderly cousins Ella and Marcia (the latter a Dame thanks to her World War I service), and the long-suffering James—not to mention her young son James Too (‘That white thing? I thought it was a parcel. She drags that child around too much.’)

But when Mrs Cavendish decides to enslave Don’s wife to replace her lost servants and Molly turns her affections on James, Daisy is forced to re-think her priorities. First published in 1959 and reprinted here for the first time, A Pink Front Door is one of Stella Gibbons’ most delightful and perceptive social comedies. This new edition features an introduction by twentieth-century women’s historian Elizabeth Crawford.