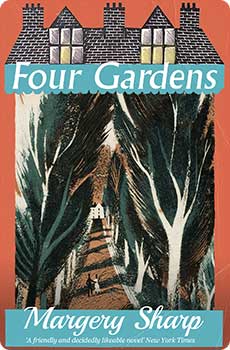 She was intensely conscious of herself—of her dress, her voice, the way she placed her feet. She felt like a cook-general going to be interviewed.

She announced herself, rather self-consciously, as Mrs. Henry Smith, and he replied that Mrs. Cornwallis was expecting her. To Caroline, following him through a wide shabby hall, the whole episode was beginning to feel like a nightmare. She was intensely conscious of herself-of her dress, her voice, the way she placed her feet. She felt like a cook-general going to be interviewed.

In Four Gardens, the most emotional and nostalgic of Margery Sharp's brilliant novels, we meet the lovable Caroline Smith (née Chase) and glimpse the stages of her life through the gardens in which she digs. There's the lavish abandoned one in which she has no right to dig; the tiny one in which she has no time to dig; the extravagant one, complete with stubborn gardener, in which she's not allowed to dig; and one final garden, hers and hers alone, in which she finds quiet, wise contentment. As we follow Caroline through the vicissitudes of life, we meet her adoring husband Henry, her shockingly modern children Leon and Lily, and friends and neighbours from the self-righteous Ellen Taylor to the posh but hilariously down-to-earth Lady Tregarthan.

First published in 1935 and out of print for more than half a century, Four Gardens has long been a favorite of Margery Sharp fans and is one of six early Sharp novels now available from Furrowed Middlebrow and Dean Street Press.

'The Jane Austen touch, springing from a detached, quiet power of observation, a delicious, satirical way of relishing affectation, and a respect for sensible, genuine people.' New York Times