The Case Of The Three Lost Letters 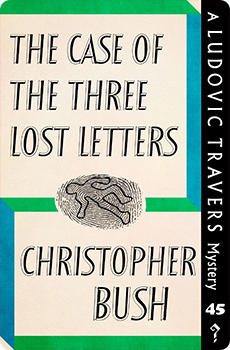 I liked him. When I heard of his death I was quite upset.

I liked him. When I heard of his death I was quite upset.

Henry Baldlow is a nervous man. An apparent invalid, he plans to emigrate for his health, yet claims to require a detective to guard his life in the interim. Ludovic Travers isn’t initially convinced, but when one of his operatives turns up dead, and then Baldlow himself, he takes charge. A series of visitors were asked to call at specific times on the afternoon of Baldlow’s death—was one of these the culprit? Investigating the case entails Travers reluctantly romancing a femme fatale, peeking in at the jewellery business, and exploring the murky world of show-business, before he brings the crime home to the murderer.

The Case of the Three Lost Letters was originally published in 1954. This new edition features an introduction by crime fiction historian Curtis Evans.

“A model detective story on classical lines: an original central idea, with a complicated plot to clothe it, plenty of sound, straightforward detection by a mellowed Ludovic Travers and never a word that is not strictly relevant to the story.” Anthony Berkeley