The Case Of The Silken Petticoat 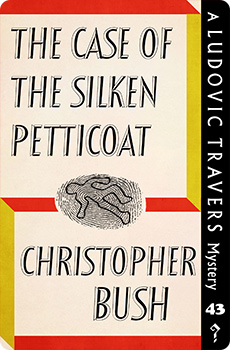 Between the acting of a dreadful thing, and the first motion...

Between the acting of a dreadful thing, and the first motion...

Ludovic Travers sees it happen. He sees a strange young woman assault Clement Foorde, and all because he had expressed his dislike for a certain best-selling novel. Is it a publicity stunt? The matter escapes Travers’s mind until he hears on the radio one night that the author of the novel in question has been drowned. Everyone, including the police, thinks the affair to be no more than a tragic accident; everyone except the dead man’s brother who comes to see Travers at the Broad Street Detective Agency with a piece of information that places the case in an entirely new light. Christopher Bush again proves himself a master of the true detective story, with plenty of hard thinking and fast action before the solution is reached.

The Case of the Silken Petticoat was originally published in 1953. This new edition features an introduction by crime fiction historian Curtis Evans.