The Case Of The Burnt Bohemian 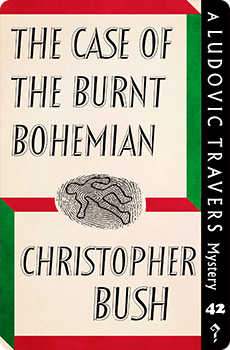 Isn’t it a tremendous coincidence that his murderer should also have had large front teeth?

Isn’t it a tremendous coincidence that his murderer should also have had large front teeth?

Ludovic Travers has received a good many queer requests and enquiries at the Broad Street Detective Agency, but a psychiatrist in fear of his life and in search of a bodyguard is something new. An appointment is made for the following day, but Travers has barely completed a few discreet enquiries concerning his new client when he receives another call. This time it is a summons from George Wharton of Scotland Yard. Would he please come to a flat in Chelsea where an artist has just been stabbed, and an attempt made to destroy evidence by burning the body.

It looks like a routine matter till suddenly the long arm of coincidence stretches out and ties the Cases of the Nervous Psychiatrist and the Burnt Bohemian into one knot of Gordian complexity. Christopher Bush is a proven master of the true detective story, and in this one he is at his urbanely intriguing and ingenious best.

The Case of the Burnt Bohemian was originally published in 1953. This new edition features an introduction by crime fiction historian Curtis Evans.

“Yet another sound piece of work . . . in that, alas!, almost extinct genre, the real detective story, with Ludovic Travers in his very best form.” Anthony Berkeley