The Case Of The Counterfeit Colonel 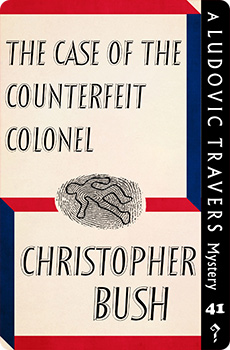 His head went sideways, like a hopping sparrow’s on a lawn.

His head went sideways, like a hopping sparrow’s on a lawn.

The man who saves Henry Clandon’s life during the campaign in Sicily visits him once in hospital, gives his name as David Seeway, makes vague and apparently pointless reference to somebody else called Archie Dibben and a country town called Bassingford, and then virtually disappears. Eight years later, Henry Clandon, now a director of a London publishing firm, sets out to try and find his rescuer.

This is how he comes to be shown into Ludovic Travers’ office at the Broad Street Detective Agency. Something about the case provokes Travers into following a trail by way of dusty newspaper files and the intricacies of theatrical gossip, to a pleasantly prosperous house in which a gentleman of military aspect had just died with his boots on. Travers polishes his spectacles and puts through a phone call to George Wharton at the Yard, for now there is a taker as well as a saver of life to find.

The Case of the Counterfeit Colonel was originally published in 1952. This new edition features an introduction by crime fiction historian Curtis Evans.