The Heel Of Achilles 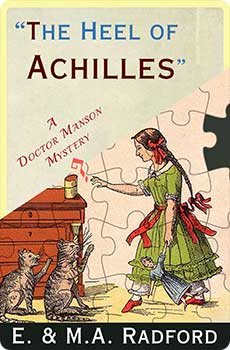 It was at that moment that Jack knew he had to kill.

It was at that moment that Jack knew he had to kill.

The trouble began during a holiday in Paignton. When Jack met Mary, his future wife, he also met James Sprogson, a charming villain bent on destroying the couple’s happiness. Mary distrusted Sprogson but Jack regarded him as a good fellow who drank and gambled a little too much, perhaps, but was harmless and likeable. However, Jack’s association with Sprogson was to lead to robbery, blackmail and, at last, murder.

This is the eighth of the Doctor Manson mysteries, first published in 1950. A classic example of the inverted murder story, it is in the best tradition of the golden age detective novel. It further enhanced the reputation which E. and M.A. Radford established for themselves as writers of ingenious ‘whodunits’.