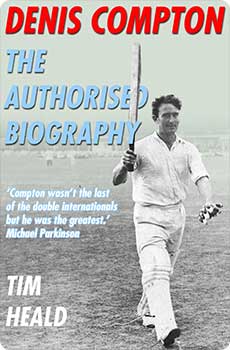 ‘Compton was not the last of the double internationals, but he was the greatest’ Michael Parkinson

Denis Compton was one of England’s – indeed cricket’s – greatest batsmen. In the summer of 1947 alone he scored 18 hundreds. A flashing strokeplayer who could take any bowling attack apart, he also played football at the highest level, winning an FA Cup-winners medal with Arsenal. The original ‘Brylcreem Boy’, perhaps British sport’s first true media personality, Compton cut a dashing figure, and when he died was mourned as the kind of cricketer whose like we shall never see again.

‘Never have I been so deeply touched on a cricket ground as I was in this heavenly summer when I went to Lord’s to see a pale-faced crowd existing on rations, the rocket bomb still in the ears of most folk – see this worn, dowdy crowd watching Compton. The strain of long years of anxiety and affliction passed from all hearts at the sight of Compton in full sail... There were no rations in an innings by Compton’ Neville Cardus

‘Compton was not the last of the double internationals, but he was the greatest’ Michael Parkinson