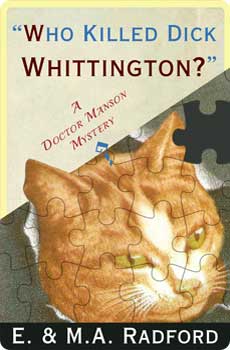 “I think you had better telephone for the police,” he said. “This woman has been poisoned.”

“I think you had better telephone for the police,” he said. “This woman has been poisoned.”

Norma de Grey, the Principal in the Christmas pantomime Dick Whittington, was not popular with the rest of the Pavilion Theatre company. But was she hated enough to be killed by prussic acid, during the performance itself?

Suspicion immediately falls on the Cat, her fellow actor in the fatal scene. Until it transpires that the Cat too has been poisoned – and his understudy has a solid alibi. But someone must have donned the disguise and appeared on stage incognito. Detective-Inspector Harry Manson, analytical detective par excellence, is on the case.

Who Killed Dick Whittington? was originally published in 1947. This new edition includes an introduction by crime fiction historian Nigel Moss.