The Case Of The Black Twenty-two 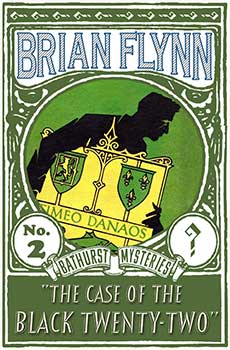 “Mr. Laurence P. Stewart was murdered last night in his library. He was found with his skull battered in!”

“Mr. Laurence P. Stewart was murdered last night in his library. He was found with his skull battered in!”

Peter Daventry, a young lawyer, receives instructions from a rich client to purchase three valuable artefacts once belonging to Mary, Queen of Scots. It’s a singular request, with no limit on the money to be paid at the auction. But the day after Daventry inspects the items, they are stolen from the auction house and a security guard is found horribly murdered.

The next morning, Daventry and his colleagues are startled to discover that the client, miles away at his country house, has also been slain – in a room locked from the inside. Faced with such a dilemma, there’s only one thing that can be done – call for Anthony Bathurst, detective extraordinaire.

The Case of the Black Twenty-Two was originally published in 1928. This new edition includes an introduction by crime fiction historian Steve Barge.

“A skilful piece of work” Bystander