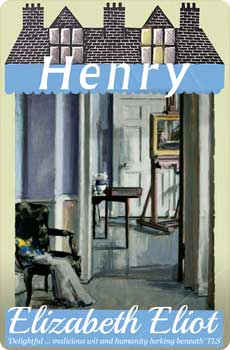 ‘The trouble with you, Anne, is that you’re always imagining things.’ ‘Anne, how beautiful you are looking today.’ Or even: ‘That’s a good girl finishing up all your dinner.’

‘The trouble with you, Anne, is that you’re always imagining things.’ Who had said that? Probably mother. Or the governess before she left to get married. How disagreeable, and it was all the fault of the sub-conscious. . . . Why didn’t the sub-conscious ever turn up things like: ‘Anne, how beautiful you are looking today.’ Or even: ‘That’s a good girl finishing up all your dinner.’

Anne Palliser is insecure, morbid, and a bit off-balance—in other words, a perfect Elizabeth Eliot narrator. She escapes an overbearing mother and moves to London, working as secretary to the eccentric Lady Merton and dating a detective novelist. But her self-absorbed and irresponsible brother Henry remains a central focus. In the years after running away from school to join the circus, Henry marries, divorces, keeps a mistress, gambles, and flirts with Lady Merton. Now he plans to marry a doctor and turn the family home into a maternity hospital. What could go wrong?

Anne observes it all in unique style—daft, brilliant, and dark by turn, but always hilarious. Henry is Elizabeth Eliot’s acclaimed second novel. Her debut, Alice, and two subsequent novels, Mrs. Martell and Cecil, have also been reprinted by Furrowed Middlebrow and Dean Street Press. They feature a new introduction by Elizabeth Crawford.

“This novel has a tart and unique flavour of its own, and the author displays her most amusing and delightful stylistic trick, which is to have the last word” Daily Telegraph