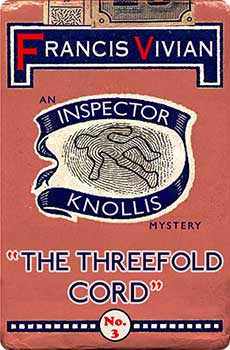 “Death has no manners as a general rule. In this instance he was a reformed character, and knocked twice before entering.”

“Death has no manners as a general rule. In this instance he was a reformed character, and knocked twice before entering.”

Inspector Gordon Knollis heads from Scotland Yard to the village of Bowland, investigating what initially appears a trivial mystery. Mrs. Frederick Manchester’s life centres on her husband and her two pets. Entering her boudoir after breakfast on Sunday morning, she finds her budgerigar lying dead, its neck broken, a blue silken cord tied loosely round it. On the Monday, in the cactus house, she finds her cat lying amongst the plants. A blue silken cord is looped round its neck—which is broken.

But Knollis soon sees the case as far from trivial, an opinion confirmed when the partly-decapitated body of Fred Manchester is found in the Green Alley early on the Tuesday evening—with a blue silken cord crushed into his outside breast-pocket.

Knollis goes to work in his own determined way. There are many difficulties, and many setbacks, but he presses on in spite of them all, eventually solving the grim joke that lies behind the mystery of the three cords.

The Threefold Cord was originally published in 1947. This new edition features an introduction by crime fiction historian Curtis Evans.