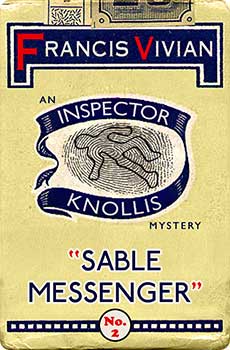 If Lesley Dexter had not been a snob her husband might have lived out his three-score-and-ten years.

If Lesley Dexter had not been a snob her husband might have lived out his three-score-and-ten years.

Five years have passed without any major crime disturbing the provincial peace of the city of Burnham, and then, on an October night, a scream rends the midnight air in the residential suburb of Westford Bridge. P.C. Daker, hurrying to the door of Himalaya Villa in River Close, finds the tenant, Robert Dexter, lying dead across his own threshold. After a night's investigation, Sir Wilfrid Burrows, the Chief Constable, decides to call in New Scotland Yard.

Inspector Gordon Knollis, transferred to the Yard during the war years, is sent down to the city where he had once been the head of the C.I.D. He finds himself faced with a disturbing puzzle, a crime with no apparent motive, and even his knowledge of local conditions does little to help him in his endeavours to unravel it. There is a host of alibis, but he breaks them down one by one in his own inimitable way, eventually resolving the situation and providing a denouement that comes as a surprise even to his own assistant, Sergeant Ellis.