The Case Of The Green Felt Hat 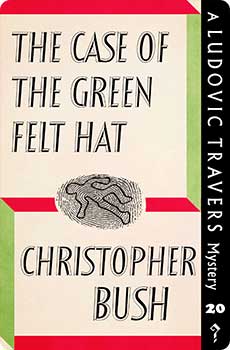 “George Wharton said he hoped I’d have a nice murder for you.”

“George Wharton said he hoped I’d have a nice murder for you.”

Ludovic Travers and his wife choose to spend part of their honeymoon in the quiet town of Edensthorpe—one place where they can be sure of peace and quiet, and where an eminent author and his famous wife might not be recognised.

Unfortunately for them, however, another fugitive has sought anonymity in the nearby village of Pettistone—a swindler named Brewse who has just completed a prison sentence for fraud. Brewse has made an unfortunate choice of home, because the leading citizens of Pettistone all suffered serious financial losses as a result of his fraudulent dealings, and they unite in an effort to drive him away from the village. Before they can do so, however, somebody decides upon a more permanent method of getting rid of Brewse.

Ludovic Travers cannot, once again, resist the temptation to use his powers of insight and detection to discover the murderer of the man in the green hat.

The Case of the Green Felt Hat was originally published in 1939. This new edition features an introduction by crime fiction historian Curtis Evans.