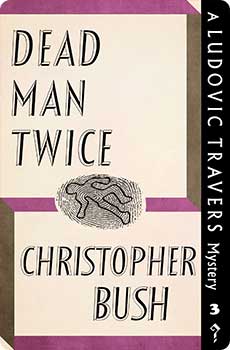 “And that’s not all. Somers is dead too … He poisoned himself … in the lounge!”

“And that’s not all. Somers is dead too … He poisoned himself … in the lounge!”

The great English boxer Michael France looks set to become the new Heavyweight Champion of the world. Everyone is waiting with bated breath for the forthcoming and decisive match. Ex-CID officer John Franklin is no exception – but once the boxer is apparently murdered (twice), Franklin must join forces with Ludovic Travers once more in a layered and ingenious mystery where Michael France’s closest friends are the primary suspects – yet have cast-iron alibis. The final solution involves an ingenious and plausible murder technique, a fine demonstration of Christopher Bush’s imaginative and suspenseful plotting at its best.