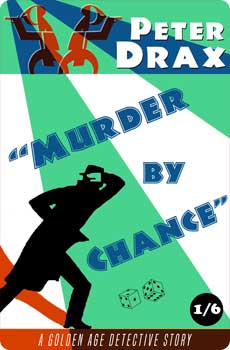 The knife with the carved sheath inlaid with silver, had been driven up to its haft between the shoulders of Captain Geoffrey Hunt.

The knife with the carved sheath inlaid with silver, had been driven up to its haft between the shoulders of Captain Geoffrey Hunt.

Johannis Kudorfer, master mariner, is a fraudster and a rogue. But that suits Sam Hartford just fine, because he is a scoundrel himself. When Sam devises a scheme to wreck a ship for the insurance money, Kudorfer is a key collaborator, along with a small gang of other miscreants and dupes, plus Lena the languid cigarette-smoking girl. But Sam is unaware that some of his trusted cohort are playing games of their own—games so treacherous they will end in murder. Detective-Sergeant Woods, suspicious of the con game from the start, will need to call in Chief Inspector Thompson of Scotland Yard to solve this gritty and absorbing case.

Murder by Chance was first published in 1936, and has remained out of print for many decades until this new edition. It includes an introduction by crime fiction historian Curtis Evans.

‘A thriller of great merit ... all extremely convincing’ The Times