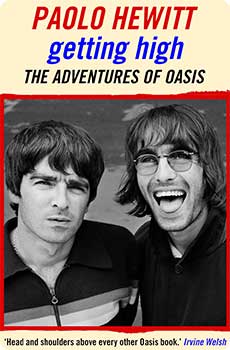 Between 1994 and 1996, music writer Paolo Hewitt spent the greater part of his life on the road with Oasis, in the U.K., Europe and America. He came back with tales that would cement the legend of the brawling, effing, hedonistic, charismatic, confessional and extraordinarily talented Gallagher brothers, Noel and Liam, and their group.

Hewitt is a rare and perceptive fly-on-the-wall during the band’s hectic rise to the height of their powers, as their first two albums are released to the kind of excitement scarcely seen in British rock music since the sixties.

Hewitt takes the Gallaghers’ story right back to their parents’ roots in Ireland, and the descriptions of Noel and Liam’s childhoods in working-class Manchester reveal the seeds of their determination to make Oasis the force it became.

Getting High is an illuminating, funny, sometimes shocking reminder of how big a band can get, and how quickly the insanity sets in. Oasis have today sold in excess of 70 million records worldwide. Hewitt's intimate account of this explosive and beloved band, in their prime, is a rock classic and a riveting narrative.

‘Unlimited access to all areas of the Oasis bandwagon is the ace up this biography’s sleeve.’ Q

‘By adopting a fly-on-the-wall approach and writing Oasis’s story as though it were a novel rather than a straight biography, he succeeds in entertaining, informing and occasionally putting you inside the head of the Gallagher brothers.’ Hot Press

‘In Getting High we get closer to the real Oasis, not the tabloid fancies, the music press stereotypes of Noel the genius, Liam the wanker and three other blokes who don’t count. Hewitt paints an engrossing and uplifting portrait of one of the most important bands of the decade.’ The Word and Issue

‘If you only buy one book about Oasis, then make sure it’s this one.’ FHM

‘This well-researched tome chronicles many a pivotal moment in Oasis’s history and is filled with plenty of ribald anecdotes.’ NME

‘Head and shoulders above every other Oasis book. I hated finishing it so much I read it again.’ Irvine Welsh