The Beatles In Tonypandy 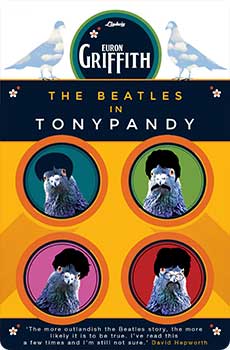 In September 1967, the Beatles came to Tonypandy, South Wales, and spent six days with Tom Morris of 23 Upper Chemical Terrace …

In September 1967, the Beatles came to Tonypandy, South Wales, and spent six days with Tom Morris of 23 Upper Chemical Terrace …

In August 1967, the Beatles were stunned by the death of their manager and mentor Brian Epstein. In the immediate aftermath, John, Paul, George and Ringo sought comfort in the low-key company of a middle-aged Welshman – and in their new but obsessive hobby of racing pigeons. All was well, until the Maharishi arrived to put the cat among them …

Elsewhere, in ‘Dylan Goes Electric’, an alternative sixties is evoked, where modernist poets rule the pop charts; ‘Villa Nellcôte’ depicts the Rolling Stones’ former south-of-France mansion today, where a small-time local playboy is still busy with the visiting groupies; and the title character in ‘“Crazy” Luke Dober’ becomes the most tragically fated, yet somehow overlooked, man in the history of rock’n’roll.

Euron Griffith’s writing sits in a special and dream-like place between immaculate pop documentary and minimal short story telling. Evocative and imaginative, The Beatles in Tonypandy is a must for Fab Four fanatics who think they’ve read it all. It carves out unique territory that thumps the funny bone and touches the heart.

‘A delicious vision of the psychedelic Beatles in a parallel universe, part satire and part rural comedy.’ Peter Doggett

‘Beautifully written, warm and captivating stories that will make you smile.’ Huw Stephens

‘Probably the most important music book ever, especially for Beatles and Dylan scholars. Sorry Mr Davies and Mr Lewisohn and Mr Scaduto and Mr Shelton but you have just been gazumped.’ Paolo Hewitt

‘The more outlandish the Beatles story, the more likely it is to be true. I’ve read this a few times and I’m still not sure.’ David Hepworth

‘Fond, psychedelic short stories that are rooted in fact – the Beatles, Dylan, the Stones – and evolve into softly comic fiction. The real tales have all been told but Euron Griffith has delightfully invented some new ones’ Mark Ellen