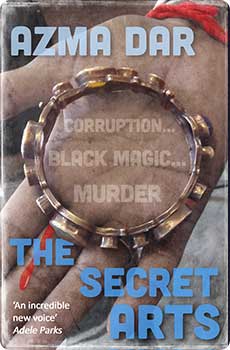 A prayer for cancer, a prayer to make millions. A prayer to kill an enemy’s reproductive functions, a prayer to remove the devil inside a girl who had suddenly started misbehaving and doing badly in school exams. The man sitting here wanted his neighbour’s daughter to fall in love with him, and for her fiancé’s mustard crops to be affected by drought.

In the lush Murree hill-country of Pakistan, a wedding has been announced, between Colonel Anwar Ahmed Ali, and Saika, a younger schoolteacher. Anwar is regarded by all as an upstanding figure – yet his glamorous former wife Zaireena died under mysterious circumstances, not to mention the poisoning of Pamela, her pet poodle. And Saika has now been told her new bridegroom is ‘a dangerous man’...

Across town, there is a seething cauldron of corruption, black magic, and close-knit families who can barely stand each other. So when Saika’s disreputable cousin Pervez is stabbed to death in his own hotel by a cloaked assailant, no one is very surprised, but Saika is shocked to find evidence implicating her husband. Inspector Sharif, in charge of the case, is looking everywhere for clues to the crime – and unearthing smoking guns and red herrings alike.

All the while, up in her eyrie the sinister Begum, Anwar’s invalid mother in law, lies... waiting and plotting.

In this accomplished and blackly comedic debut novel, Azma Dar captures the exuberance and dark side of a small community whose traditions are under attack from the forces of greed, jealousy and thwarted revenge.