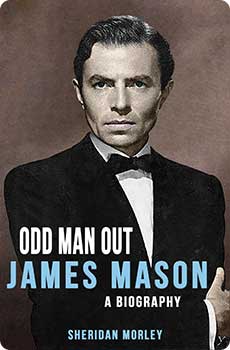 ‘Incredibly good-looking, in a dark way … that curious quality of a man with an eternal secret. … That was what was so arresting. … That and the voice.’ Geraldine Fitzgerald

‘Incredibly good-looking, in a dark way … that curious quality of a man with an eternal secret. … That was what was so arresting. … That and the voice.’ Geraldine Fitzgerald

The reason for watching a James Mason film, as the film critic Pauline Kael once noted, was usually only James Mason himself.

Mason was actually pointed toward a career in architecture before acting overtook him during his third year at Cambridge. He went on to make an indelible impression playing emotionally haunted characters on stage and screen, such as one early stand-out role, Johnny McQueen in Carol Reed’s Odd Man Out (1947).

Mason and his first wife, Pamela, arrived in the United States in the late forties, and the Hollywood phase of his career lasted through the 1950s. It memorably included diverse classics such as The Desert Fox, A Star is Born (for which he was Oscar-nominated) and North by Northwest.

After his return to Europe, and remarried to Clarissa Kaye, he continued in landmark movies such as Lolita, Georgy Girl, The Verdict and, his last, The Shooting Party, receiving two more Oscar nominations in the process. But in this revealing book, Mason is shown to be a highly sensitive man uncomfortable with stardom, and often at odds with attempts to mould or typecast him. He remains, in legacy, the most intriguing and unpredictable of the great screen-actors.

‘James knew how to steal movies, and give a performance that only really got noticed when the whole film was put together; so he would emerge with immense distinction having apparently been doing very little on the set.’ Christopher Plummer