Crime On My Hands 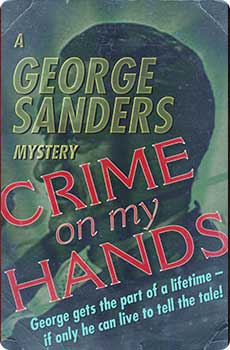 George gets the part of a lifetime – if he can only live to tell the tale!

Lionized the world over as the ultimate on-screen bounder, cad and ladies’ man, he is in serious danger of becoming typecast as the particular kind of gentleman sleuth seen in his long-running film series The Saint and The Falcon. George would actually be quite happy at home, tinkering with his inventions, but if he must act he wants something he can sink his teeth into.

Now George’s firecracker agent, Melva, has got him the part of a lifetime – the lead in a hot new western, starring alongside screen goddess Carla Folsom. But when shooting begins, someone takes the term a little too literally, and the dead body of an extra is found. That wasn’t in the script – and neither was George’s unwilling debut as real-life private detective, only this time he’s also been cast as the police’s number one suspect. Before you can shout ‘action’ the game is afoot and the victims start to mount up, with George remaining just one step ahead of the law until the final denouement.

Crime on My Hands, the debut George Sanders mystery, is a suspenseful and highly entertaining backstage crime novel, which perfectly captures the wit and charm of George Sanders, especially his quintessentially polished, sardonic dialogue. Anyone who loves All Abour Eve, or enjoys golden age crime fiction, will find Crime on My Hands irresistible.

‘Lots of fun and a sufficiency of bloodshed.’ New York Times

‘A highly readable thriller with laughs on the side.’ New York Herald-Tribune