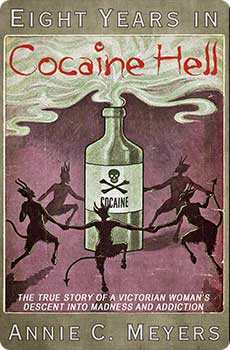 “I never used any other drug but the clear cocaine and I believe that I am the only living person in the world to-day who ever took two hundred grains in twenty-four hours and survived.”

“To the sensitive (cocaine) is soothing, to the stupid it is enlivening, to the exhausted it gives strength and mental vigor. To the sufferers from pain it gives peace…” Dr. T.D. Crothers, 1899

“I never used any other drug but the clear cocaine and I believe that I am the only living person in the world to-day who ever took two hundred grains in twenty-four hours and survived.” Annie C. Meyers

The autobiographical Eight Years in Cocaine Hell (1902) recounts in shockingly straightforward style the transformation of Annie C. Meyers, affluent and well-connected Chicago widow, to junkie, thief, forger, inventor of the ‘Cocaine Dance’, and ultimately authoress of the first drug confessional written by a woman.

It was 1894. Annie Meyers had a bad cold, and her lawyer advised her to try Birney’s Catarrh Powder, in which then-legal cocaine was a principal active ingredient. She rapidly became addicted to the drug, ran through her money and travelled the USA shoplifting, house-breaking and writing forged checks to support her habit.

Arrested repeatedly, miraculously escaping a custodial sentence, Annie finally tried safe-blowing and was collared for the final time: ‘homeless and friendless, degraded and frenzied, insane, a broken-down and pitiful wreck of what I had once been.’ She had lost most of her teeth (one gold tooth she had extracted herself and sold), her upper jaw was eaten away and ulcers covered much of her body. She was down to about five and a half stones in weight. Remarkably, and happily, she recovered, with the help of her long-suffering sister and the St. Luke Society, who encouraged and originally published this concise, ground-breaking memoir.

“Her book established a literary genre, and her case helped to outlaw cocaine.” Stuart Walton, Intoxicology