Veronica: The Lady and the Lake 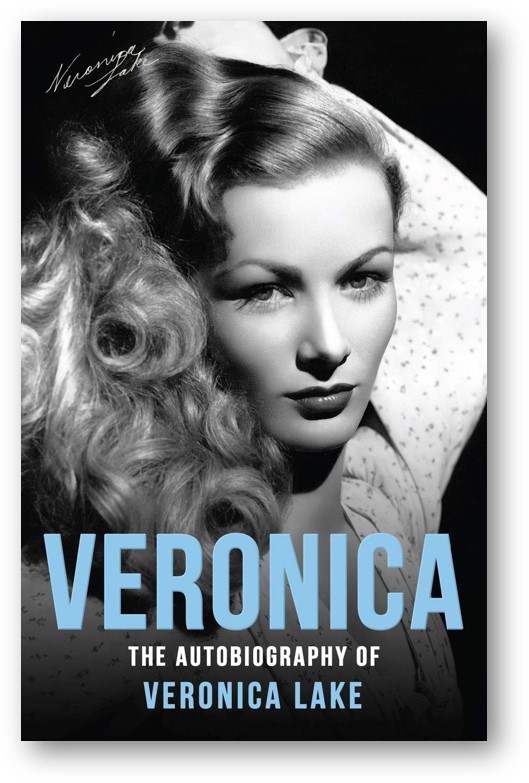 Veronica Lake, movie star, was a tiny but luminous beacon of sexiness and sass who shined bright and cool during the dark days of World War II. Barely out of her teens, she became an icon of mid-20th century America. Women emulated her spunk and style and that famous come-hither cascade of blonde luster. Men fantasized about her. The movie business exploited her. She lived high, metaphorically and literally, working and cavorting with the most beautiful and talented people in the world.

Constance “Connie” Ockleman was a gal with no great aspirations, no grand illusions. She was regular folk, both a clock-puncher and a vagabond, never above an honest day’s labor. She was a struggling single mother and, by her own admission, not very good at it. She liked to laugh, loved a party, and had a wicked sense of humor. She could fly a plane, mix a cocktail, and knock you on your ass with a short right cross.

Like so many actresses in Hollywood, she got labeled by the guys who run the show: temptress, siren, vixen, femme fatale . . . these tags are still affixed to her, to this day, even though she rarely played the part onscreen. Watching Lake now, in films like Sullivan’s Travels, The Glass Key, and This Gun for Hire, it’s her feisty spirit, more than her physical allure, that’s the main attraction. Men may have seen her as a sex kitten, but women—then and now—see her as a cat who could take care of herself. This was no doubt a huge part of her appeal during wartime.

Part of Veronica’s rebellion, like Sterling Hayden’s, was a fondness for drink and, presumably, drugs. Her reputation for being difficult on sets—and inebriated off them—cost her dearly. While the public has granted Sterling Hayden a legacy as a heroic, larger-than-life iconoclast, it has branded Lake’s life after Hollywood a steady downward spiral of abasement. Blame a cultural double standard that applauds reckless rebellion in men but shames it in women.

Veronica: the Autobiography of Veronica Lake is a courageous, beautiful book. I don’t feel it is sad, although some surely will. Many people believe a life well lived is supposed to culminate in material wealth and an expansive family. Not renegades—for them, living on their own terms is both the adventure and the reward, whatever pain or glory results. That’s why I can’t see her tale as a tragedy, despite its premature ending. Once you know the whole story, maybe you too will find Connie Ockleman as memorable as her cinematic chimera, Veronica Lake.

(Excerpted from Eddie Muller’s introduction to Veronica: the Autobiography of Veronica Lake.)