Comfort For The New Year? 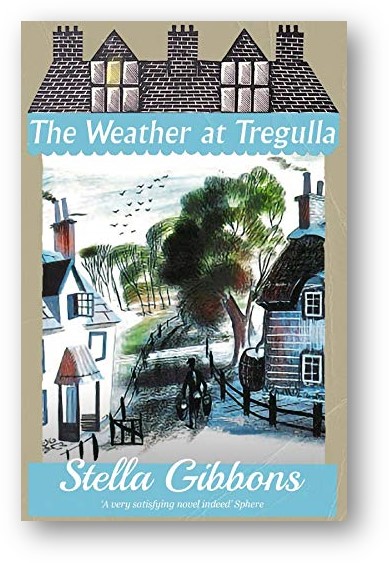 This New Year feels different to most; the passing of time was not marked with its usual, glorious bang, but rather quietly celebrated from the sofas of homes across the world. Many of us find ourselves in the same circumstances as we have been for the last ten months, and it can be hard to reconcile this feeling of stasis with the welcome notion of a fresh start. But there is a light at the end of the tunnel – and in the meantime, the combined factors of cold weather and lockdown measures make it the perfect time to curl up with a book. The latest Furrowed Middlebrow titles, a collection of novels by Stella Gibbons and Margery Sharp, offer wonderfully astute observations of character and relationships, comedic yet poignant stories that will bring both comfort and escapism.

‘Nothing is wrong at all [with Tregulla] except complete and utter mental isolation and starvation’ claims an exasperated Una at the beginning of Gibbons’s The Weather at Tregulla (1962). Though Una’s plans to escape to London are foiled by the financial implications of her mother’s death, her frustration at being stuck in ‘the most boring place on God’s earth’ is no doubt something we can all relate to. Unable to pursue the theatrical career she had planned for herself, Una has to stay in a remote corner of Cornwall – a place in which nothing much changes except the weather.

Her predicament is shared by the young protagonists of Sharp’s Fanfare for Tin Trumpets (1933). The novel opens with Henry and Alistair deciding to move to London to chase dreams of teaching and writing. Alistair in particular is impatient to begin his career, calculating his savings to be just enough to keep him afloat whilst he writes two excellent novels. Needless to say, things do not go exactly to plan. In both novels, these restless young characters are confronted with the reality that one cannot predict the future. It is a realisation that we’ve all had to face time and time again over the past year – but though we may often feel like disheartened Una, both novels also offer a plenty of solace.

Despite her disappointment at being trapped in Tregulla, Una never fails to see the beauty of her surroundings. As is expected of any Gibbons novel, the landscape is described with magnificent detail. Gibbons writes of the ‘rippling foam, under the thin blaze of the young sun, bathed in air blowing across miles of salt water’. If we are not lucky enough to be in lockdown near the sea, Gibbons certainly transports us there. At the end of the novel, a slightly more mature Una looks out over the Cornish coast that she calls home. The sea is ‘a line of blue, deeply coloured as a cornflower, seemingly motionless yet with an indefinable energy quivering through it, an almost angry fullness of life and power’. With this evocative detail – the quivering, indefinable energy beneath a still vista – Gibbons transforms the ocean from being a painful reminder of Una’s isolation into a source of promise and hope.

Characteristic of her observational prowess, Gibbons gives us generous portrayals of flawed characters, always allowing room for growth. If there is a moral or message in her work, it is that we find joy in our relationships with others, no matter how unlikely. More often than not, these relationships morph from animosity and suspicion into warm acceptance. Nowhere is this better illustrated than The Snow-woman (1969). Bitter Maude, whose sombre life has been dictated by the mourning of her three brothers, is outraged when a young waif accidentally gives birth on her sofa – a legacy inherited from Great Aunt Dorothea, no less. She is equally irritable at the prospect of a trip to the South of France with her long-time frenemy, and nothing short of horrified to discover the holiday will also involve confronting some old foes. It will not come as a surprise to any reader that the so-called Snow-woman’s icy demeanour soon melts, softened by the love and care she finds in relationships old and new.

As one character notes at the end of A Pink Front Door (1959), ‘all that matters in the world are duty, courage and love’. The sentiment resonates with our present moment. Though we may not be able to travel to the South of France, beautiful Cornwall or exciting London, we can continue to look out for the people around us, appreciate what we have, and have faith that better times will come. As always, Gibbons’s and Sharp’s writing is both a comfort and a joy, something to relate to and something to transport us: the perfect antidote to navigating uncertain times.