“I dreamed I went to Manderley... again” 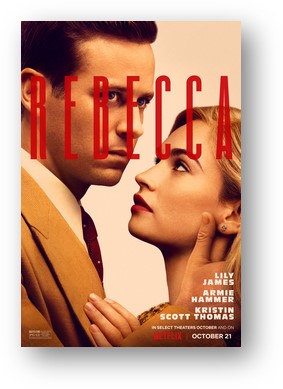 With the 1997 British miniseries based upon Daphne du Maurier’s 1938 Neo-Gothic novel Rebecca, the world wondered why it needed a remake of Alfred Hitchcock’s 1940 classic. As near to perfect a movie of its genre can get, Hitchcock’s version saw Laurence Olivier gleefully chewing the scenery as mysterious Maxim de Winter (a perfect partner to Joan Fontaine as his sweet and simpering second wife), with Judith Anderson playing the role of dastardly Mrs. Danvers with delight. Nominated for a whopping eleven Academy Awards (and winning two, for Best Picture and Best Cinematography), was there a point to retelling a story which – considering the position that Hitchcock’s Rebecca holds in movie history – didn’t really need retelling?

Well, of course there was not, but the 1997 version was well cast, and the miniseries format allowed for  further plot details and more nuanced character arcs than the original movie. Charles Dance was equal parts sinister, tragic, broken, and charming in his role as fiction’s most woeful widower, Emilia Fox (of the Fox acting dynasty) gave a nuanced performance as du Maurier’s heroine (Fox focussing on how ‘ordinary’ the girl is compared to charismatic cannonball Rebecca), and it goes without saying that the marvellous Diana Rigg had the time of her life camping it up as Mrs. Danvers. Did it rival the 1940 version? Clearly not. But it made for thoughtful and interesting viewing for fans of both the cast and du Maurier’s story, as did the (mostly forgotten) 1979 T.V. version with Jeremy Brett.

So did this year’s Netflix Original remake, but not in the same way.  Directed by Ben Wheatley and photographed in a palette of gold, dusty rose, and icy blue, higher praise cannot be given to cinematographer Laurie Rose, production designer Sarah Greenwood and costume designer Julia Day for providing such a sumptuous stage. It’s a pity that nothing happened upon it. The tension, suspense, intrigue, and romance of the Hitchcock original are barely in evidence, and as a one-off movie, it cannot benefit from the gift of time afforded to the Nineties’ miniseries to expand upon the plot or fully explore characters. Handsome Armie Hammer as Max de Winter looks lovely in his buttercup suits, but far from being the fearful, tortured wife-killer of both the book and the first two adaptations, Hammer plays him as “a nice guy with a secret”. There’s no menace to his Maxim, no gravitas.

Lilly James did her best to embody the gauche and klutzy heroine, but was far too competent and self-possessed to achieve the painful, cringe-worthy car crash of a character that deservedly earned Joan Fontaine a Best Actress Oscar nomination. Nor did she have the plodding, quotidian approach to the role as conceived by Emilia Fox. One of the best moments in both of the earlier versions is when the character suddenly snaps to, transformed from frightened mouse to roaring lion (“I am Mrs. de Winter now!”), yet this didn’t happen in Wheatley’s remake; Lilly James was always Mrs. De Winter (as her chic Riviera wardrobe of palazzo pants and sunhats and her sharply tailored suits testify). One of the intrigues of the former adaptations was how mismatched Max and his new bride were; Fontaine, clumsy, nervous, and naïve next to Olivier’s sophisticated, commanding, and ten-years-older Max. An even wider age gap separated Charles Dance’s de Winter and Emilia Fox as his wife (a thirty year age difference, to be exact) and this added not only to the ‘chalk and cheese’ aspect of the pairing, but made Max’s sorrow at her loss of innocence all the more poignant.

Lilly James and Armie Hammer are roughly the same age (in fact, she is three years his senior), and in their roles in Rebecca, both are young, both are gorgeous, both are beautifully attired in fashionable threads, and so it is absolutely no surprise when they fall in love and marry.

If Tinder had existed in the Thirties, they would both have ‘swiped right’.

With the two central characters lacking the interest or impetus of their on-screen predecessors, it is left to Mrs. Danvers to give the piece its Gothic purpose. And in this realm, the Netflix version excelled, casting the impeccable Kristen Scott Thomas as the immaculately tailored housekeeper. A far more complex rendering than Judith Anderson’s delightfully psychopathic ‘Danny’, Kristin Scott Thomas (along with screenwriters Jane Goldman, Joe Shrapnel, and Anna Waterhouse) gave Mrs. Danvers her due as a credible human being, complete with back story and pathos. However, is interesting to note that the production did little to suggest that the character’s devotion to the dead Rebecca was more than a matronly attachment, and an opportunity was possibly missed in terms of exploring the LBGTQ+ experience in less enlightened times.

In conclusion, Netflix’s Rebecca was a beautifully wrapped gift box with nothing inside it but Kristin Scott Thomas. It offered nothing new while – a the same time - eschewing every element that made the original a masterpiece.

Did the world need another adaptation of Rebecca? Not this one.