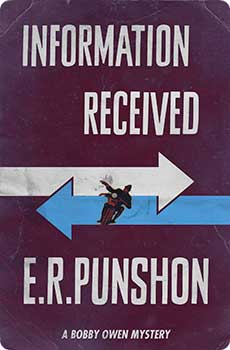 In his London townhouse, city magnate Sir Christopher Clarke is found lying murdered. At the other end of the house his safe hangs open and rifled, and earlier in the day he had visited his solicitors in order to make a drastic change in his will. Later it is discovered that there has been fraud connected with the dead man, and this is but one of the many complications with which Superintendent Mitchell is faced. Fortunately he has the assistance of young Constable Owen, a talented young Oxford graduate who, finding all other careers closed to him by the ‘economic blizzard’ of the early thirties, has joined the London Police force.

Information Received is the first of E.R. Punshon’s acclaimed Bobby Owen mysteries, first published in 1933 and the start of a series which eventually spanned thirty-five novels.

“What is distinction? The few who achieve it step – plot or no plot – unquestioned into the first rank. We recognized it in Sherlock Holmes, and in Trent’s Last Case, in The Mystery of the Villa Rose, in the Father Brown stories and in the works of Mr. E.R. Punshon we salute it every time.” Dorothy L. Sayers

“Mr E.R. Punshon is one of the most entertaining and readable of our sensational novelists because his characters really live and are not merely pegs from which a mystery depends.” Punch